It certainly doesn’t feel like 8 months has passed. At the back of my mind each time I need to go get more T I still feel like it won’t work out for some reason and I’ll have to come off it and then see that the whole thing was a childish and silly exercise. I feel reassured that so much time has passed and that things are going slowly and steadily, and that everything that has changed I have been very happy with. I feel a bit impatient about it but also happy that it doesn’t seem like there are going to be any sudden changes that I don’t want. It’s been so slow that there wasn’t really anything to update until now.

My endocrinologist asked me about the “endpoint” again, a question that quite confused me when he asked last year because I literally did not understand the question. Now I can see where he is coming from. I guess if you think of transition as getting from point A to point B then my wanting to go there really slowly doesn’t make sense. I also see why it might be confusing that I can’t articulate what point B is. I suppose I conceptualise being on T differently than that. I don’t think I’m really trying to get anywhere in particular, it just makes sense to me to have a low level of testosterone in my body. Especially considering how much hormones affect mental performance, I think it makes more sense to think of transition goals in term of T and E levels. That means, depending how many years it has been, I might manifest varying amounts of hair for example, but it isn’t really about that. With regards to hair specifically, I really don’t mind any amount between none and all, I don’t think. I know that I don’t want to be read as a man all the time, so I will avoid that, but anything short of that is … fine? There isn’t a physical-appearance-based point B that I feel I have to get to as fast as possible, nor do I feel that I will be any happier once I’m there.

I’m not sure if that makes sense or is even accurate. It’s only the latest approach I’ve taken to making sense of my ineffable desire to be on T. I’ve felt the same way for the last few years but I expect I’ll be able to articulate it better over time.

Overall I think I am very happy with how things are going, and would like them to continue at this pace. 🙂

Boring dosage details: I started on testosterone gel in June 2019 with the goal of taking a low dose for slow changes. I did 25mg for about a month then increased to 50mg. I got a blood test in September which found my T levels right at the lower edge of the cis male range, so increased again to 50mg and 100mg on alternating days (each sachet is 50mg so this is to avoid having to do halves) around October. I got my levels tested again today (13 Feb 2020) and was surprised to find them even lower than they were in September, at 7 nmol/L! I apply the gel at night (last night was a 50mg night) and had the blood test in the afternoon, so the measurement is of the lowest point in the cycle, and it’s presumably higher the rest of the day, peaking a few hours after application.

Apparently there’s some disagreement in the definition of a “low dose” of gel. For some people 50mg daily is enough to get T levels well into the cis male range, and have changes at full speed. However, for others, perhaps because of differences in how the gel is absorbed through the skin, this is low. Also, of course, the speed that people understand to be “slow” transition varies wildly. My endocrinologist considers 50mg a “full dose” and said it was unusual that I still have my period at this dose, but I suppose variation is to be expected. I usually skip over the boring dosage details in other people’s update posts so I have no idea, but Micah’s post here suggests 25-75mg daily could still be “low”.

Sidenote: I really appreciate my endocrinologist in singapore! We had a good talk about how fast things are going and what I want, which helped me decide what to do with my dose. It even helped to just put my thoughts into words. Much better than the confusing guesswork I’d been doing in my head. I will miss him when I leap into the uncaring arms of the NHS.

Anyway, on to the actual updates! Changes and feelings in order of me noticing them, with the caveat that not only I am probably the least observant person in the whole world I also have no pictorial memory:

Bottom growth: happened within a week. Before it happened I did not know what to expect and didn’t know how I would feel about it. Now I am extremely happy! Cannot overstate how pleased I am. It seems to have stagnated after the first few months, but I’m hoping for more, as much more as possible. It was itchy at first, which I didn’t know about.

Sex stuff: The change in my sex drive is impossible to separate out from the other things going on in my life, but it’s not impossible that I got hornier. It’s possible my orgasms feel different and I smell different but that could also have been because I heard someone say that happened to them and then I imagined it. I definitely need more lube.

Hungry: SO hungry for the whole of the second month, and then it went back to normal

Hair: my upper lip hair got the teensiest bit darker about 2 months in, and then another tiny bit darker again. It’s still fine hairs, not the coarse kind you get in actual facial hair, which I still have none of. I started out with very little hair everywhere, much less than the average Singaporean Chinese woman, who is already sparsely haired. By which I mean: I have 15 armpit hairs. I could name all of them if I want. After 4 months I finally noticed some coarse hair growing on my legs, where I had none before. Quite sure I still have less than the average cis Chinese woman though.

I don’t really feel one way or another about this. I quite enjoy running my fingers over my thigh hairs; good texture. I don’t mind if I get more or not. Apparently many women feel some sort of way about body hair though, which I notice whenever it comes up and then people start comparing. It is quite strange to be told even now that my relative hairlessness is to be envied. Like, it feels like a compliment but doesn’t make any sense. If anything I want to have at least as much hair as the cis women so they’d stop commenting on it. I’m trying my best!

Muscle?: a friend said I look a bit buffer, which is nice considering I did 0 exercise. Some pants I had that used to be tight at the hips now fits. Now that I think about it I also used to get quite upset about how my hips look in clothes. My shirts still ride up on my hips which are still very much there, which is still annoying but I can’t remember when I last got upset about it. I have the tiniest of a BELLY now! I love her. I noticed her about a month in, and I think that’s where I got hair first.

I think my face hasn’t changed at all though, but I will again remind you that I am faceblind and have no idea what I look like. I was counting on people’s reactions in public toilets to let me know how I’m being read so I can see if it’s changed, but weirdly only ONE aunty has stared at me this entire last month I’ve been in SG. What’s going on!! Did everyone get gender diversity training while I was gone? I move so frictionlessly through public space it’s been creepy. I started off trying to take pictures of my face regularly but then gave up when it didn’t seem to be changing haha.

Taller??: at least 3 people I hadn’t seen since before T and who don’t know I’m on T independently commented that I’m taller than I remember. Several people are also shorter than I remember. However, I got measured at the hospital today and I am NOT taller!! Maybe I just stand different? Maybe something about how your center of gravity is higher on T makes you seem taller? Mystery!

Voice: annoyingly I’ve had some kind of low-level cold since September, which is a really long time to have a cold. My favourite endo reckons it’s very unlikely to be related to the T but who knows. So it’s impossible to properly figure out where my voice is at now, but I suspect a little bit lower than before. I also get random sore throats which are either actual sore throats or my voice changing. Who knows! I am worried that when this cold finally clears I will find my voice has dropped 3 octaves, but I don’t think that has happened.

Menstruation: I got my period regularly and same as usual for the first 6 months, then it got lighter, then was like 15 days late but back to regular strength. Am I just going to have to worry about immaculate conception for the rest of my life? We’ll see!

Feelings: eh. I am very sure I didn’t feel any different the first few months, but now more time has passed and more life has gone by that it is more difficult to compare. Overall I don’t feel extremely different I don’t think. I definitely feel more confident and assured in my gender and less worried about fitting in with Other Queers or being read a certain way or anything else, which might be more from the fact of being on T at all than the T itself. I used to have very bad mental health days around the midpoint in my menstrual cycle which hasn’t happened since starting on T, maybe because T leveled out the hormonal variations somewhat. 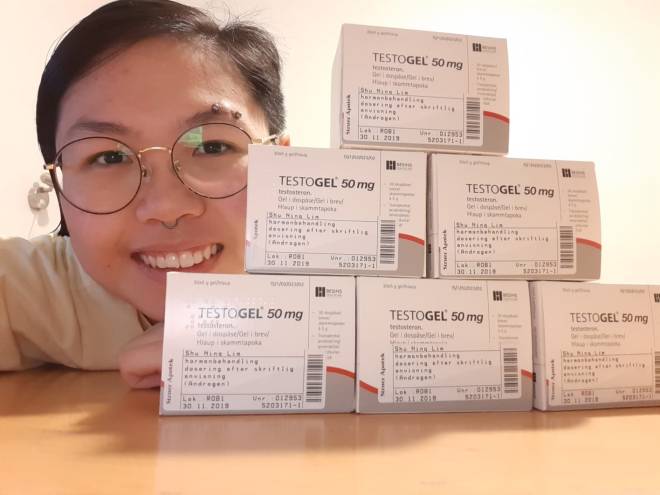 I, brand ambassador. Currently on my 10th box